The first round of JobMine postings closed last night at 11:59 EST, and although this isn't exactly Jobmined data, it still is tangentially related to JobMine.

If you haven't read Lisa Zhang's post yet, I highly recommend you do (or at least have it open for reference). Her blog has a bunch of statistics-related things that make for an interesting read.

Due to the way JobMine works, I have made the following assumptions and normalizations to the dataset:

For our purposes, a job posting is the notice that employers post on JobMine. Each posting can have multiple openings, which is the number of students they'll ideally hire. Now onto the JobMine employer statistics!

Here's a heatmap of the weekend's postings, with companies from 4 of the 7 continents offering co-op positions to Waterloo students. 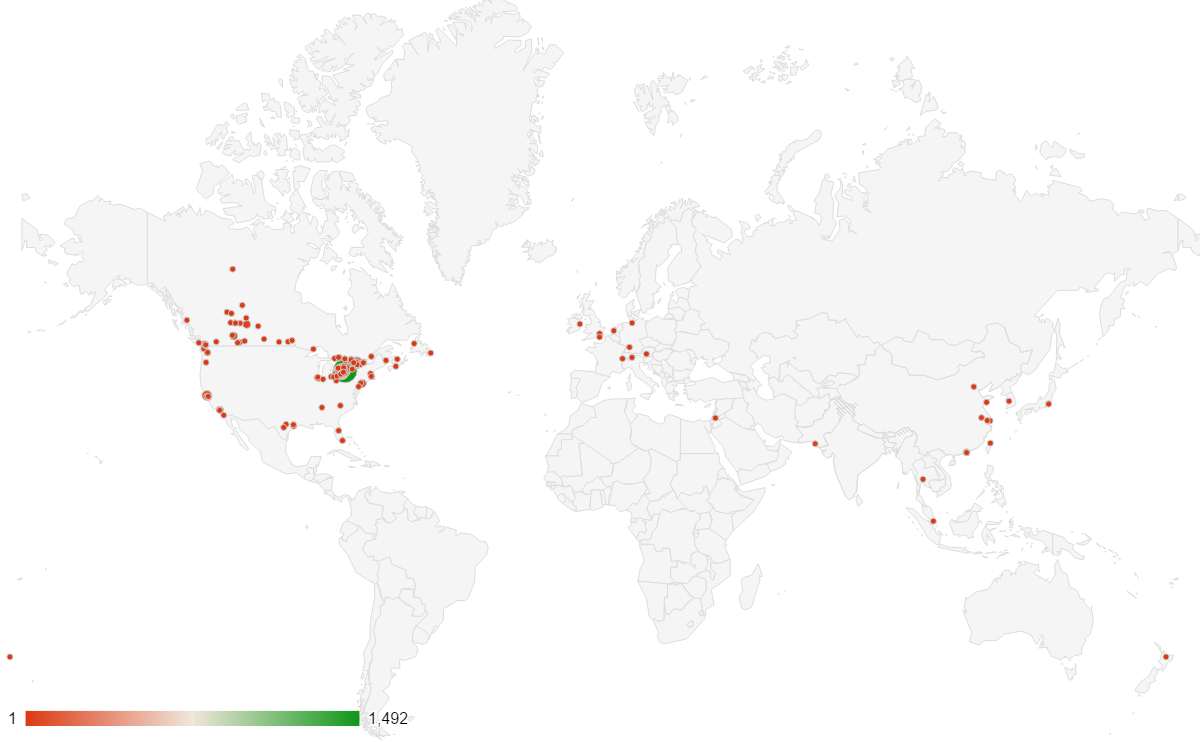 You can click on the map for a larger image, but it doesn't really do justice to the sheer volume of postings in Toronto and the Kitchener/Waterloo area.

Here's the top 10 locations with the greatest amount of job openings.

It's no real surprise that Toronto and Waterloo retain their number 1 and 2 positions. What's interesting is that San Francisco—which wasn't even on Lisa's Top 10 list—checks in at position 6.

If we take the top 10 locations by the number of applicants, we see a similar story.

The applications heatmap doesn't really show anything different from the openings map. 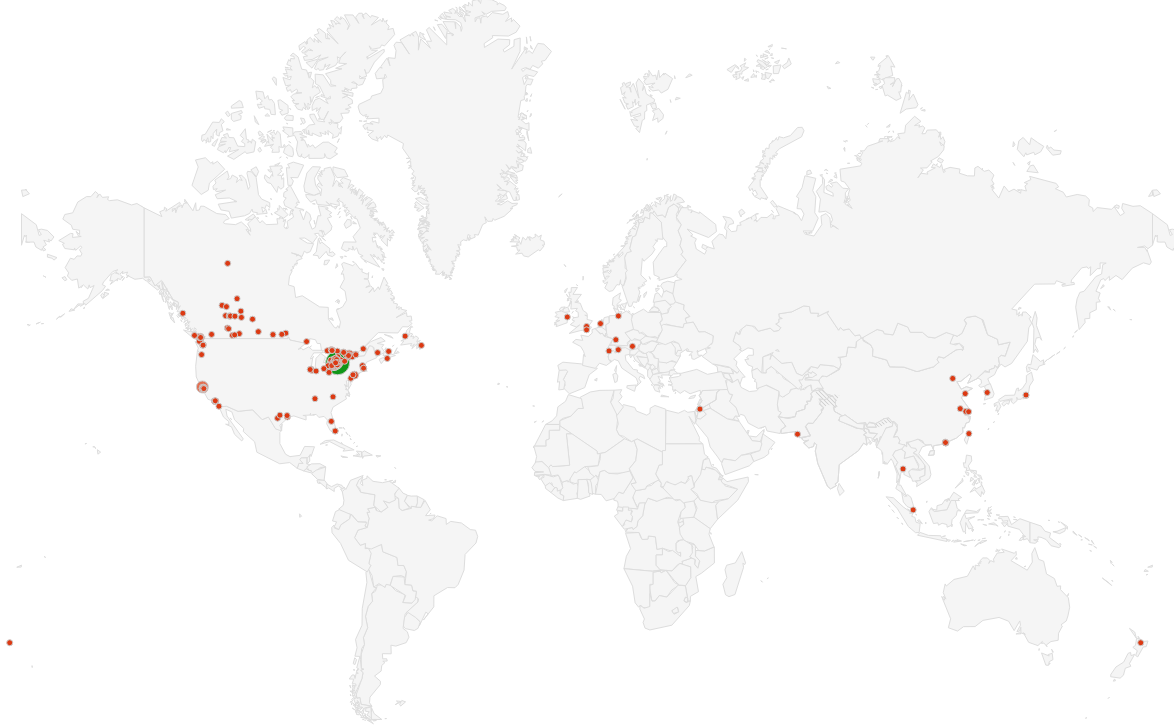 But if we look at the top cities that get the most applicants per job opening instead, it's a completely different picture.

If you think about companies that have offices in each city, the numbers start to make a lot of sense.

Cities like Dublin don't offer many job openings, but they are immensely popular among co-op students (most likely because of the foreign location). They are also usually satellite offices for other Silicon-Valley companies, so language isn't that big of an issue, if at all.

In addition, Waterloo students are not limited to these postings—we're also free to apply to jobs outside of JobMine. That's part of the beauty of the co-op system, and shows just how flexible it is.

I think co-op is great, giving you opportunities to travel around and see places that you might not otherwise go. I even know a few people who factor in places they want to visit, when choosing their next co-op placement!

An n-gram is simply a continuous sequence of n items from a given sequence.

Unigrams are simply n-grams with n = 1. In this case, we choose to look at words—although we could've chosen to look at individual characters.

I threw the job titles through a tokenizer, removing any stop words in the NLTK stop words list. 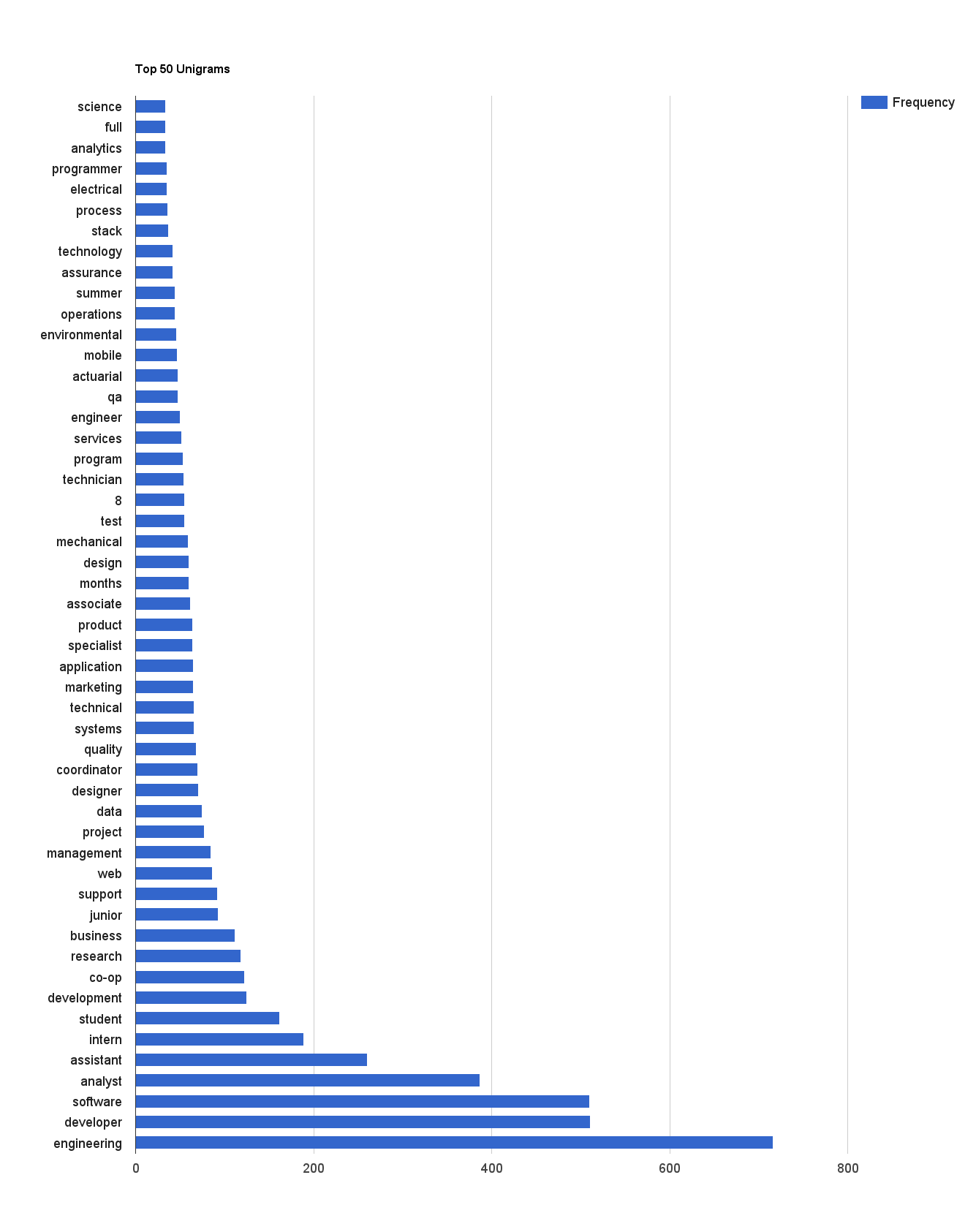 Not surprisingly, when we consider the top 50 unigrams, "software", "developer" and "engineering" took the top 3 spots.

However, I was a little surprised at how many companies referred to their hires as "co-op" students.

At least in Computer Science, most students want to be treated as full-time employees, and work on things that actually matter (and not shoved into a corner working on something that might not actually make it into production)—so much to a point that various companies will emphasize during their info sessions that co-op students are treated the same way as full-time employees. The designation of being "just a co-op" definitely turns some people away.

I thought I'd also point out that the reason the number "8" shows up fairly often is because some employers add this in the job titles to indicate whether this is a 4 or 8 month posting.

If we look at the bigrams (n = 2), we see something similar for the top two spots. 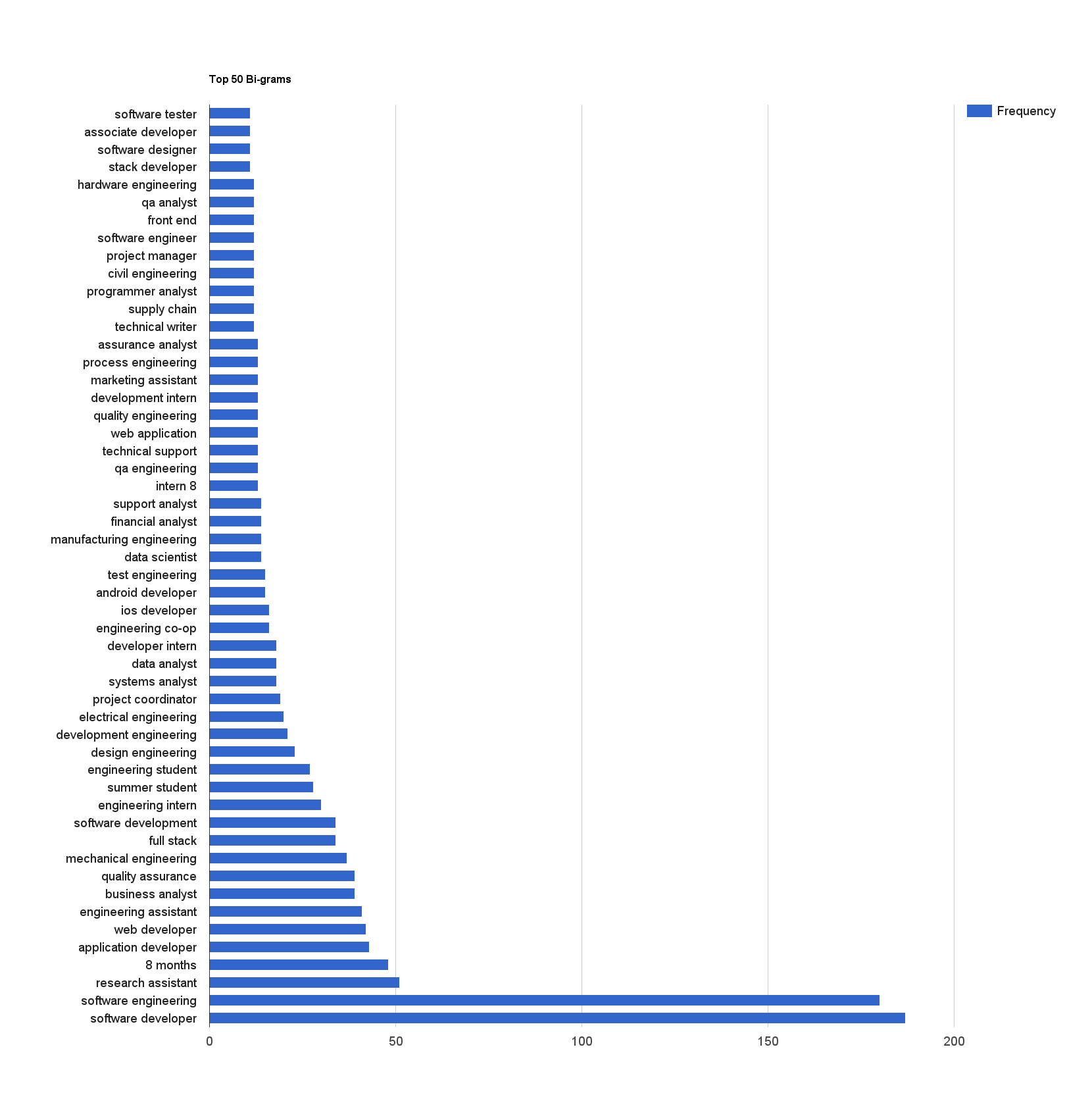 Some interesting titles include "summer student", "supply chain", and the fact that "test engineering" is marginally higher than "quality engineering" and "assurance analyst".

Job titles aren't very long, but we can look at trigrams to look for more patterns. Again, the top 4 results aren't particularly surprising. 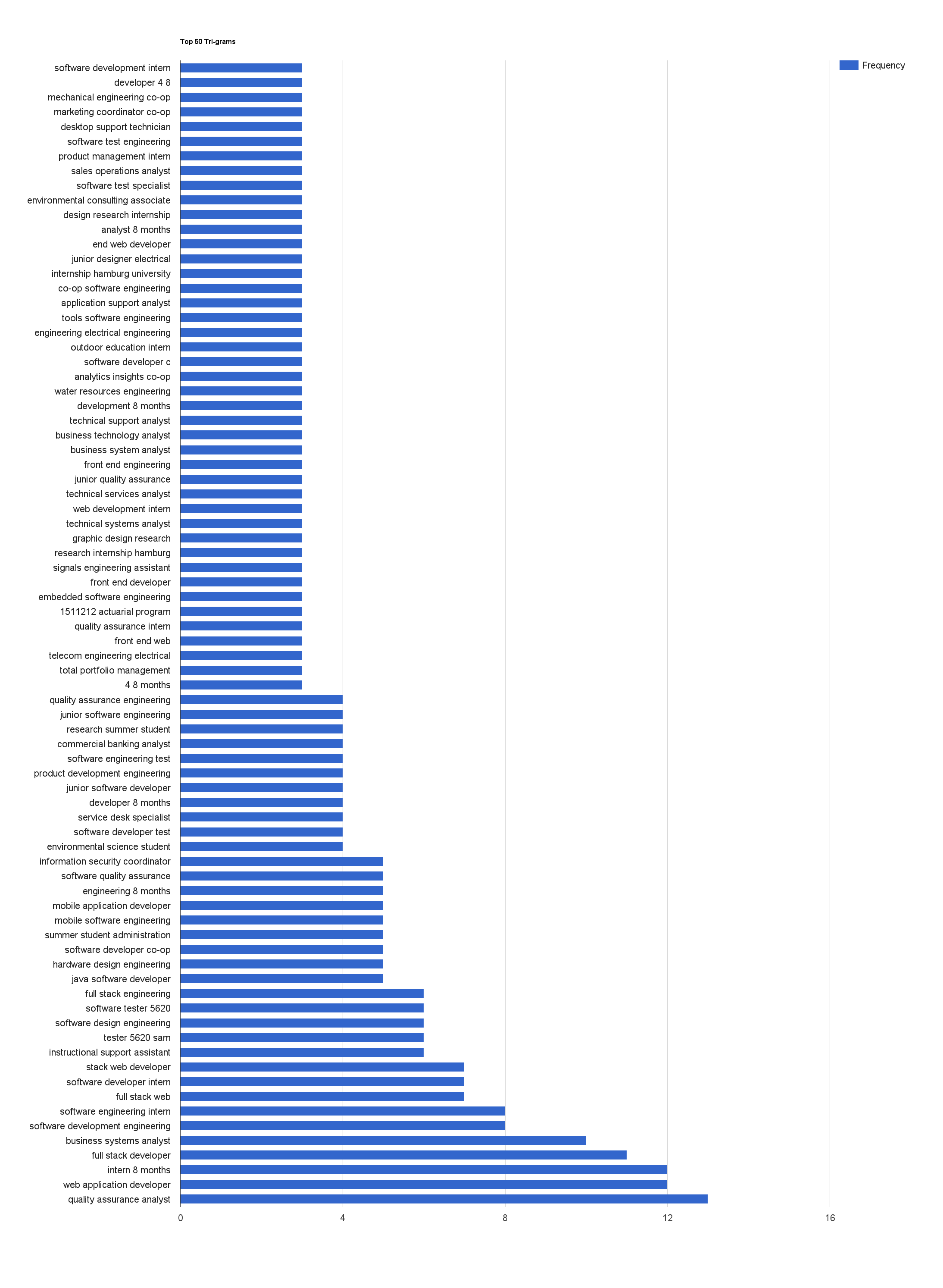 Note: The numbers in the titles are job posting IDs for various internal applications that companies may prefer candidates use.

You may want to right click on the graphs to view a larger resolution image.

I think it may be worthwhile to look into how postings for various faculties affects the way employers tailor their postings. We'll take a look at that in the next post.