Ever since 2016, I started keeping track of my dotfiles. In my dotfiles, I had configured my ~/.bash_history file to keep an unlimited number of lines of history.

Sometime in 2017, I reformatted my laptop and didn't think to backup my ~/.bash_history. As such, my ~/.bash_history file only contains data after Thursday, 13 April 2017 that were executed on my Ubuntu partition.

How I did it

I exported the following variables in my shell:

Then set these shell options:

Things this does not track

In addition, the following are not included:

Even if we assume that 90% of the work I did in the past 2 years was on machines that this data doesn't include (which seems reasonable), that's still 20 MB. 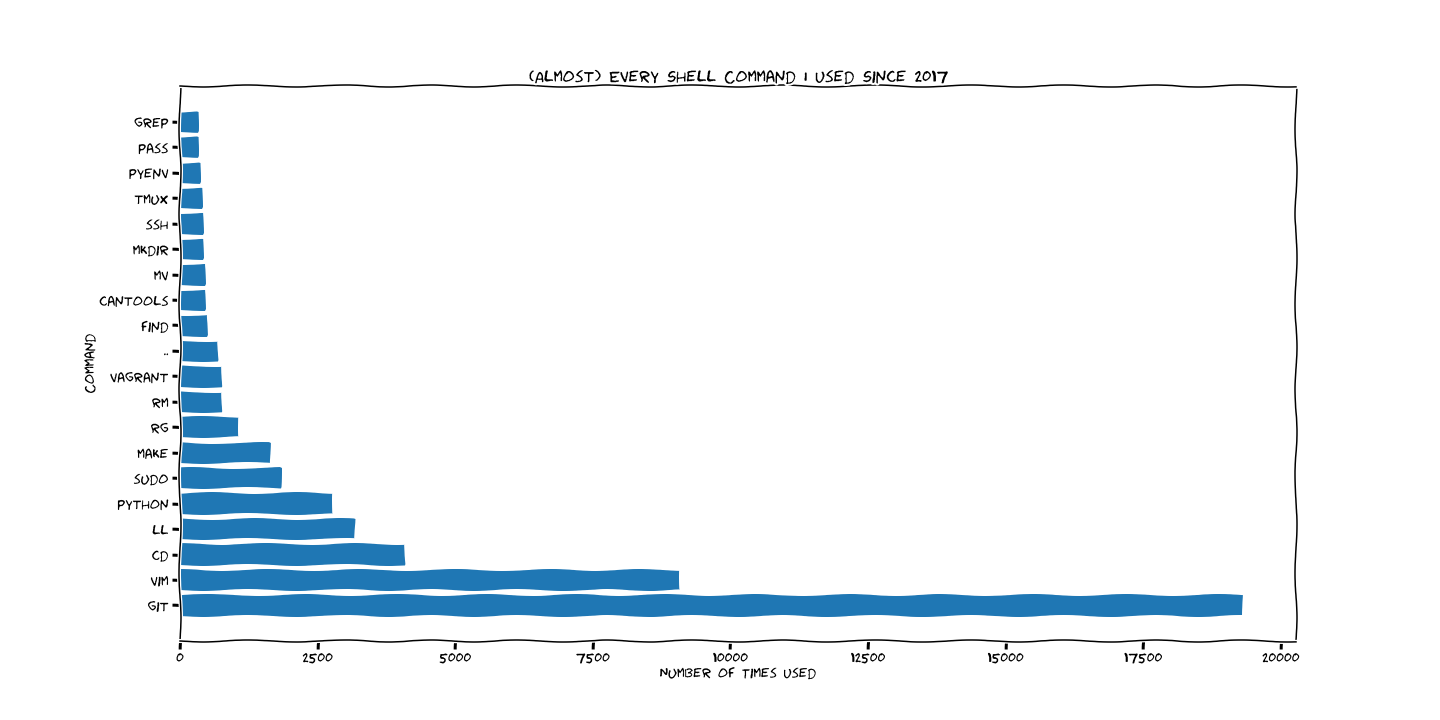 I'm not really surprised by the Top 20 commands. They're all commands I regularly use as part of my workflow.

I use git for all my side projects and assignments. I did try out Mercurial for a bit, but I found that GitHub's integrations and our school's GitLab instance were too useful to give up. Plus, most courses required us submit via Git (if we weren't using the custom submit scripts that were on the undergrad servers). git commands are also used quite frequently—to add files, checkout branches, clone repositories, etc.—so if I think about it, it isn't too unreasonable for it to be so commonly used.

vim is my editor of choice, so that isn't really a surprise either. I suppose once I open up vim in a directory, I typically just use fzf and :e to open files (and NERDTree).

ll is one of those commands I reflexively type whenever I cd into a new directory. It's gotten to the point that when I use someone else's laptop, if they don't have ll aliased, I'll alias it in that shell:

It's like this old habit I used to have where I would reflexively hit the Windows key when thinking. That took a while to break, but I think I'm mostly over that now.

I do most of my scripting in Python, as well as practice for interviews and any prototyping.

make and vagrant are probably so high up due to my work on Midnight Sun. Plus, I generally like having a Makefile so I remember how to build a project I haven't touched in a while. We used vagrant on the team to provision development environments, so that we would only have to support 1 (virtualized) configuration, and allow people to Bring Your Own Editor. I think it's worked out pretty well so far.

I discovered rg sometime in 2017, after which grep fell out of favour.

I am surprised, though, that cantools made it into the Top 20, since I started using it this year. I guess my testing as a contributor, coupled with the DBC migration that I kicked off, resulted in this being used more often.

Commands that I sudo the most 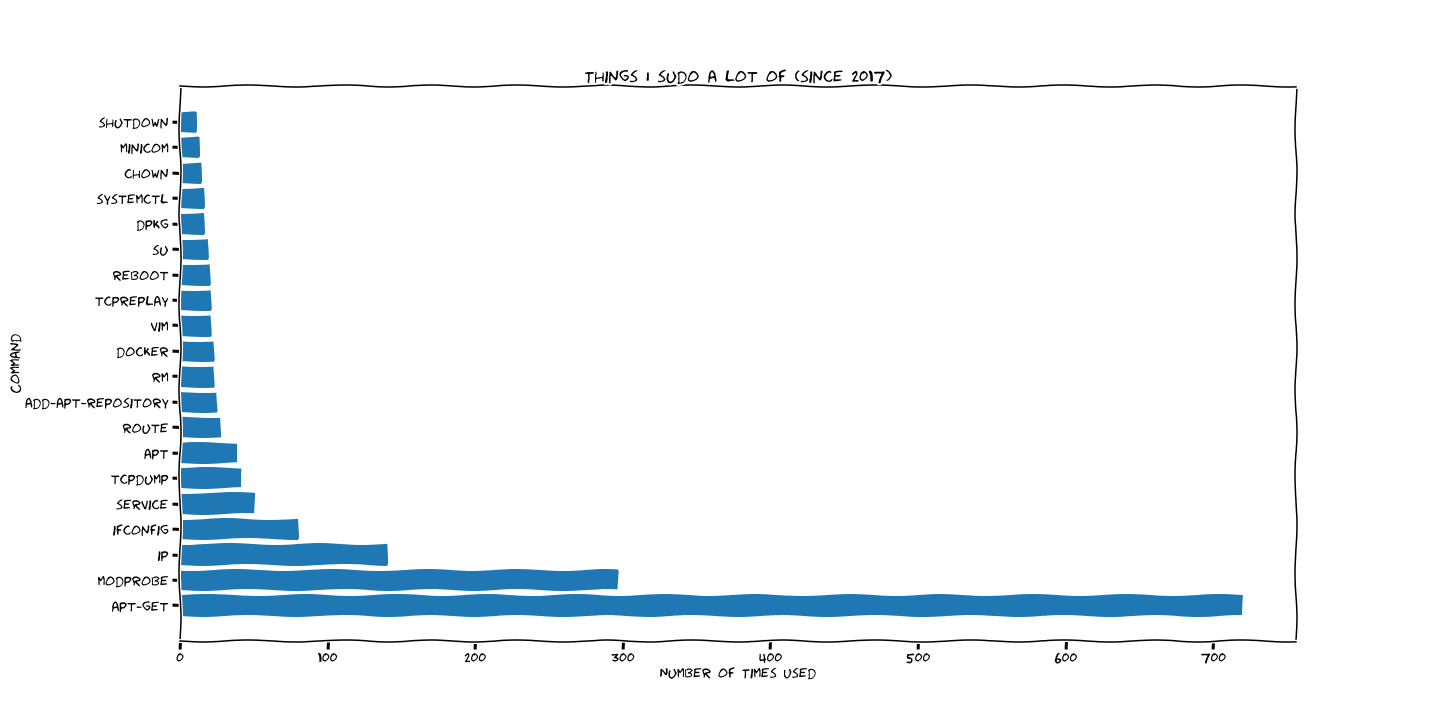 apt-get and apt make sense. I know technically I should be using apt now, but it's a hard habit to break.

This past year, I worked a lot with SocketCAN, and so a lot of it was me running:

Eventually I got sick of doing this and wrote a giant &&'d version of those 3.

That's also why ip is up there—SocketCAN is configured using netlink sockets.

I used ifconfig a lot when developing a Go-SocketCAN bridge for the Tritium CAN-Ethernet Bridge (tritiumbridgetools), in order to debug why multicast UDP routing wasn't working, as well as just general testing throughout that process. That, tcpdump, and tcpreplay were my tools of choice.

Before I added a udev rule, I needed to use sudo to access a serial device via minicom.

I also started playing around with Docker, but due to my lack of disk space on my laptop, my usage is rather limited—although, it's not really an excuse anymore, as apparently a Crucial 960 GB SSD is now only $109.99.

Other than that, I guess most of these are fairly standard.

Here are all the git commands I used. 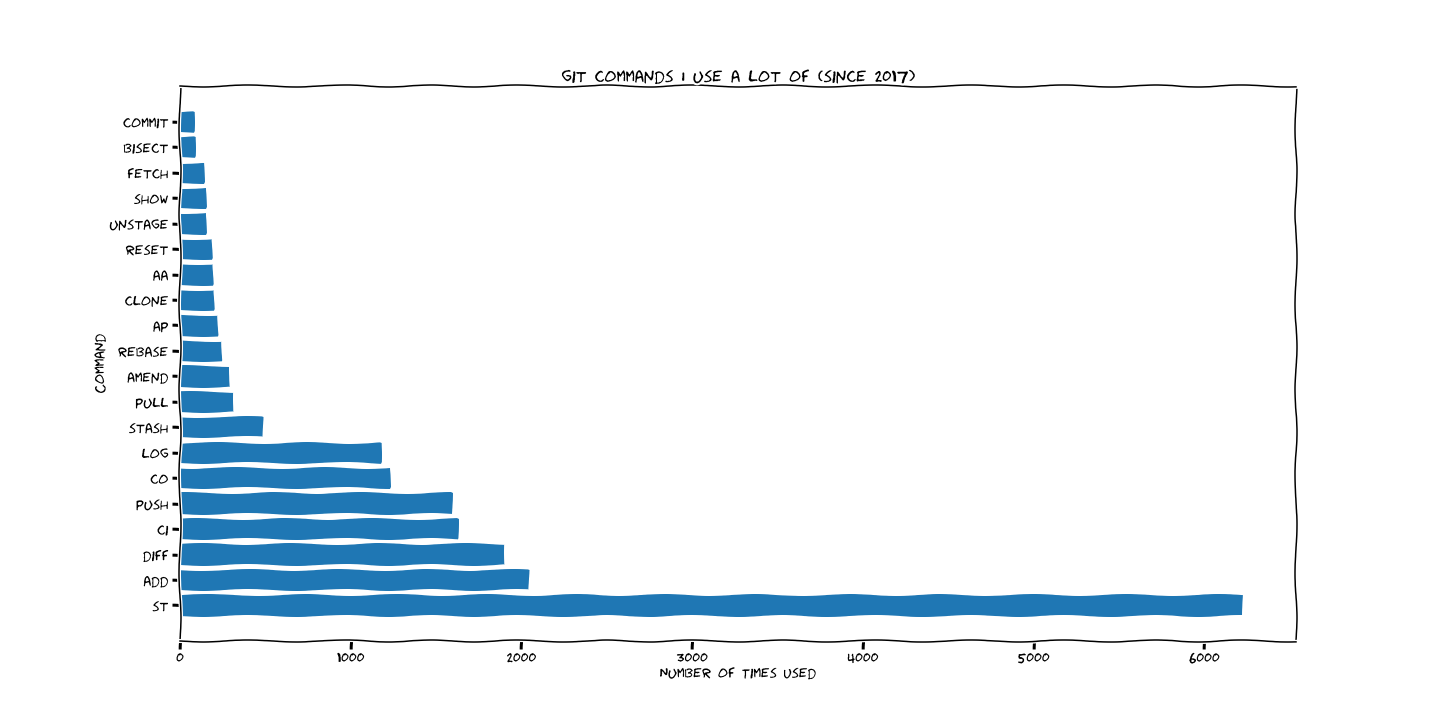 Nothing too surprising here.